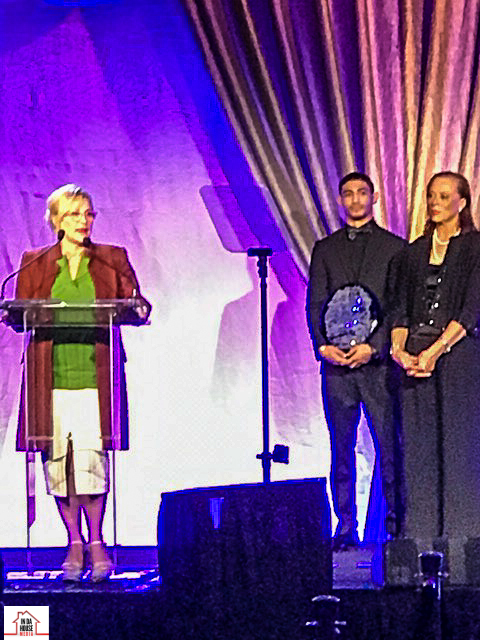 The Muhammad Ali Humanitarian Awards celebrate the greatness of people from around the world who are making a difference in their community and beyond. Six young people, 30 years and younger, are honored with an award for each of Muhammad’s Six Core Principles: Confidence, Conviction, Dedication, Giving, Respect, and Spirituality.
Patricia Arquette, Muhammad Ali Humanitarian Award for Lifetime Achievement

Actress, writer and activist Patricia Arquette has spent her career portraying memorable characters in film and on television. Winner of both the Academy Award and the Emmy for her acting, Arquette has chosen to use her considerable visibility to shine a light on issues and speak for people whose voices are rarely heard. Patricia Arquette founded GiveLove in January 2010 after the devastating earthquake in Haiti. Her hands-on approach to ecological sanitation has inspired the best experts in the field to work on programs and solutions. Patricia’s interest in promoting compost sanitation and improving public health is motivated by the desire to protect water resources, restore soil fertility, and create more resilient communities.
Patricia also supports and works with charities such as The Eracism Foundation, Libby Ross Foundation, the Art of

Elysiam, the Heart Truth, and PETA. She has galvanized a growing movement determined to achieve equality for women in the United States and has been a steadfast champion for women over the course of many years.

HRH Princess Dr. Nisreen El-Hashemite, Muhammad Ali Humanitarian of the Year Award
HRH Princess Dr. Nisreen’s origins combine history, religion, politics, education, and humanitarianism: since she is a direct descendent of the Prophet of Islam, Mohammed, and granddaughter of King Faisal (I), the founder of the Modern State of Iraq. Princess Dr. Nisreen is the recipient of multiple awards and Honorary Doctorates in the fields of science, arts, literature, and humanitarian affairs.
Among multiple other humanitarian achievements, she established the World Women’s Health and Development Forum at the United Nations and is the Founder of the Women in Science International League. In 2015, she was the catalyst for the UN General Assembly to proclaim February 11th the International Day of Women and Girls in Science.
She is founder of MUTE International Program, to promote, protect and ensure equal human rights for the deaf and hearing-impaired; and a co-founder of Culture for Peace Program, to promote peace through arts.
Ashley Judd, Muhammad Ali Kentucky Humanitarian Award
Ashley Judd is well known for dexterously starring in both box office hits and for turning in unforgettable performances in fine independent films. From her debut in Sundance Film Festival grand jury prize winner, Ruby In Paradise,  to Kiss the Girls, Double Jeopardy,  De-Lovely and the Divergent series,  her films tell very personal stories– which is exactly what Judd does when she is not making movies. She will next be seen starring in season two of Epix’s political thriller series Berlin Station.
Ashley Judd is a feminist social justice humanitarian.  She has been working internationally, with NGO’S, grass roots organizations, governments, and supranational bodies since 2004.  Presently, she serves as Global Goodwill Ambassador for UNFPA, is the Global Ambassador for Population Services International, and also for Polaris Project. She also serves on multiple advisory boards and is Chairperson of the Women’s Media Center Speech Project: Curbing Abuse, Expanding Freedom. In addition, Ms. Judd has travelled the world to do international public health.
Ashley is a graduate of the University of Kentucky, and in 2010, earned an MPA from Harvard’s Kennedy School of Government.

Paige Elenson, Muhammad Ali Humanitarian Award for Global Citizenship
A native New Yorker, graduate of New York University, and former Wall Street consultant, Paige has been teaching yoga for over a decade in the dynamic Baptiste, AcroYoga, and Jivamukti methods and is a featured presenter at many conferences and festivals.
Paige’s incisive skills as a businesswoman, spiritual activist, and yogini inspired her work with the Africa Yoga Project organization. In 2007, Paige moved to Africa and co-founded the AYP organization, a movement that empowers the youth and women of Kenya to learn, contribute, and change their lives through the transformative power of yoga. With the support of Baron Baptiste and his community, the AYP organization facilitated the first yoga teacher training in Kenya and now employs local youth to teach full-time in their own communities. AYP programs offer free classes to over 3,000 students per week, simultaneously building schools and funding education, critical operations, and environmental endeavors.
Since 2007, Paige has partnered with leaders in politics, philanthropy, design, and entertainment to broaden the AYP organization’s empowering reach. Whether working alongside Donna Karan’s Urban Zen Foundation, Christy Turlington, or Michelle Obama’s Let’s Move Initiative, Paige creates unique opportunities for community involvement and transformation. At home in Nairobi or reaching students around the world, Paige’s dedication to positive global change is infectious and inspiring.

Hill Harper, Muhammad Ali Humanitarian Award for Education
Hill Harper is an award-winning actor, best-selling author and philanthropist. Harper starred on the hit CBS drama CSI: NY, HLN’s How It Really Happened with Hill Harper, and Showtime’s award-winning series Homeland.
Harper is the author of four New York Times best-sellers and has earned seven NAACP Image Awards for his writing and acting. Hill is the author of three New York Times bestsellers: Letters to a Young Brother, Letters to a Young Sister, and The Conversation. Letters to a Young Brother was named “Best Book for Young Adults” by the American Library Association in 2007. Additionally, Harper founded The Manifest Your Destiny Foundation which is dedicated to empowering, encouraging, and inspiring underserved youth to succeed through mentorship, scholarship and grant programs.

Michael Buffer, Emcee
Buffer is world renowned for his tuxedo image and famous trademarked phrase “LET’S GET READY TO RUMBLE!TM” (“LGRTR”). He is one of the most recognized faces in the world of sports and entertainment today. Buffer’s enthusiastic and ‘adrenaline boosting’ winning attitude is sure to bring energy to the event.

The Six Core Principle Awardees (previously announced) are:
Gavin Armstrong, age 30, Toronto, Canada will be honored for his Confidence in advocating against hunger and malnutrition.
Mohammed Ashour, age 30, Austin, Texas will receive the Conviction Award. He is the co-founder and CEO of Aspire, a company that develops the most advanced inset farming technology in the world.
John-Son Oei, age 30, Petaling Jaya, Malaysia will receive the Dedication Award. He is the co-founder and CEO of EPIC, a company that aims to build relationships between the urban and rural divide through the activity of building homes for underprivileged Malaysian communities.
Iseult Ward, age 26, Dublin, Ireland will receive the Giving Award. She is the co-founder and CEO of the award-winning social enterprise FoodCloud.
Anoop Jain, age 30, Oakland, California will be honored for his Respect working on public health initiatives in India.
Hannah Taylor, age 21, Winnipeg, Canada will receive the Spirituality Award. At age 8, she founded The Ladybug Foundation, a charity that has raised millions of dollars and helped more than 65 homeless shelters and food banks across Canada.