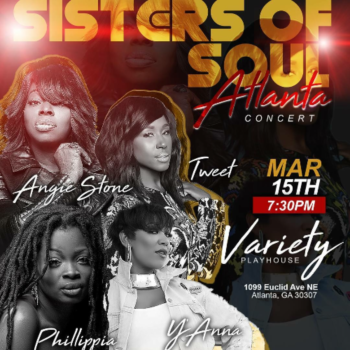 (ATLANTA, GA) — Atlanta, get ready for a rousing showcase like no other as R&B legends Angie Stone and Tweet take the stage at Variety Playhouse March 15 at 7:30 pm. They will be joined by local live music favorite Phillippia Williams and BET “Sunday Best” winner Y’Anna Crawley. Tickets are $44-$49, and on sale at www.variety-playhouse.com.

Stone is best known for her regal vocals that helped redefine the soul music genre in the 90s and well into the 2000s. Her sophistication and grit resonated with mature crowds but always maintained a street cred that gained Stone international acclaim. In 1999, her Arista debut “Black Diamond” received two Grammy nods anchored by the hypnotic melody, “No More Rain (In This Cloud). She followed up that LP with several more CDs and an onslaught of ditties, like “Wish I Didn’t Miss You,” “Brotha,” “I Wanna Thank Ya,” “Baby” and many others.

Just as Stone was becoming a household name, Tweet burst onto the scene in 2002 with “Oops (Oh My),” the female self-love anthem from her “Southern Hummingbird” debut that hit No. 7 on the Billboard Hot 100. Follow-up CDs spawned hits like “Call Me” and “Smoking Cigarettes.” Tweet’s epic collaborations with Missy Elliott, Timbaland and Trina helped keep her among the upper echelons of R&B’s hottest during her prime.

Williams keeps the Atlanta live music scene hot in her own right with her electric blend of funk, R&B, soul, jazz, reggae and hip-hop. It’s that ethereal fusion of live instrumentation, energy and stage presence that keeps Phillippia’s shows sold out. She’s performed alongside industry greats such as Jill Scott, K-Ci and Jo-Jo and Goodie Mob. Her vocal leaps and bounds even landed her a role in Tyler Perry’s “Madea’s Family Reunion” in 2005.

In 2009, Crawley bested the gospel competition BET’s “Sunday Best.” She won a recording contract, and released “The Promise” in 2010, which placed No. 2 on Billboard’s Top Gospel Albums. Winning a Stellar Award for Female Artist of the Year in 2012 is further testament to Crawley’s depth and undenial star talent.

“What’s so amazing about these artists, is they each bring a powerful flair and experience to the stage; they have incredible journeys through song that move the listener,” says local promoter Shawn Joyner, who created the “Sisters of Soul” concert. “What fans will appreciate most is the genuine love all four artists have for each other, their craft, and their fan base — the right situation for these powerhouses to bare their soul right here in the ATL.”