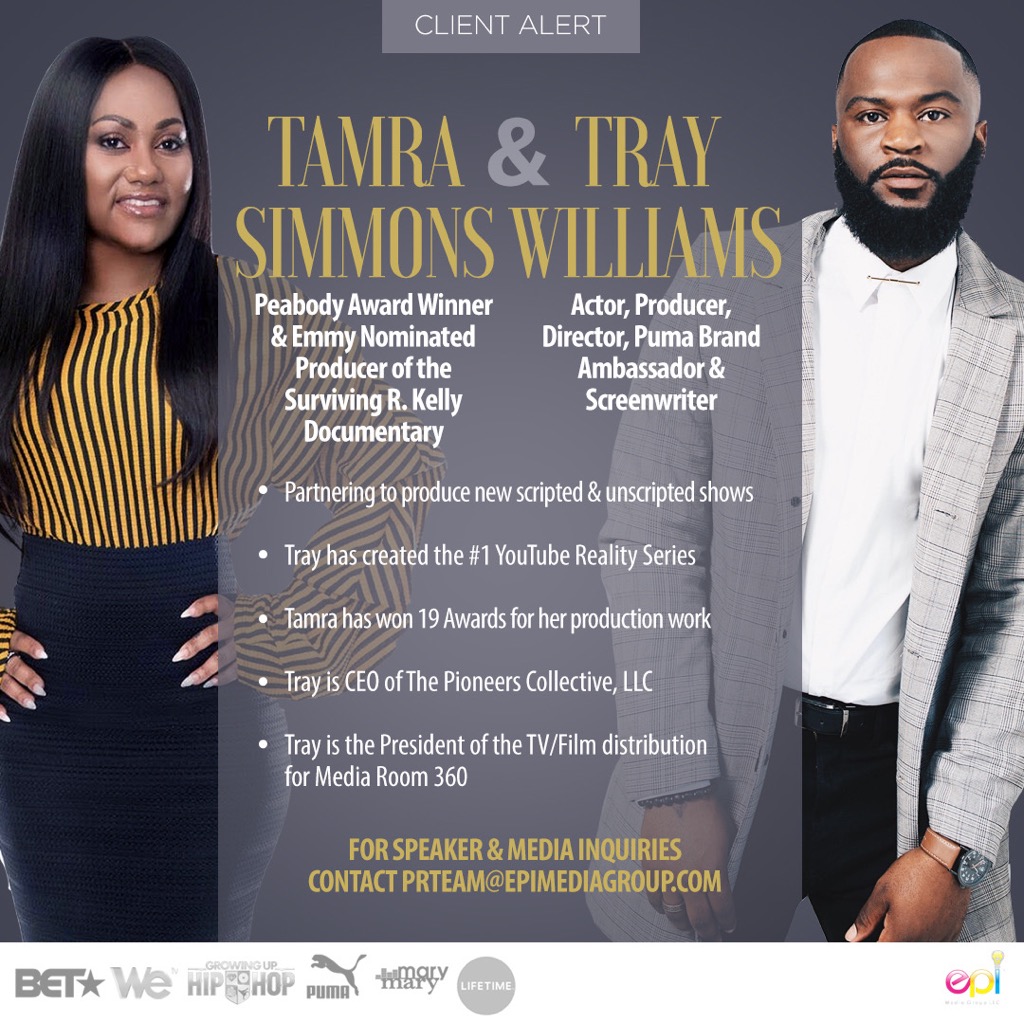 In August 2020, Award Winning Executive Producer Tamra Simmons, CEO of LA Productions, LLC and Actor, Director, Producer and Filmmaker, Tray Williams, CEO of Pioneers Collective, LLC have joined forces to develop new content for television.  The partnership will expand the reach of both firms as Tamra has received multiple awards for her non scripted projects (Surviving R. Kelly part 1 and part 2) and Tray has been recognized for his creative scripts and development (President of Media Room 360 and PUMA).

The partnership is currently working on a new and exciting social injustice documentary which will be announced in a few weeks.  With projections to release 3 new projects by the end of 2020. The purpose of the partnership is to highlight the struggles of many who suffer in silence.  Tray and Tamra are dedicated to giving a voice to those otherwise overlooked due to race, gender, or lack of economics.

Tray Williams exhaustive experience as an actor and director helped him develop into one of the top MILLENIAL FILMMAKERS of today.  His fresh perspective and his story telling skills offer a unique approach to film.  His unique nature has caught the attention of many such as PUMA, Media Room 360 LLC, Tyler Perry and many.  Tray Williams is an actor, writer, producer, director and filmmaker. As the CEO of The Pioneer Collective, LLC, he is a prolific content creator and curator of Black culture. The Houston native has been in more than 25 Hollywood projects from commercials to television and films, and has worked with some of Hollywood’s biggest names in the business. Mr. Williams also produced and developed “Trapped With The Prince Family”.  This was YouTube’s first reality competition show starring youtubers  biggest couples.  In less than a week, “Trapped with The Prince Family” received over 17 MM views. Mr. Williams is currently working on over 20 new scripted and unscripted projects which feature Naturi Naughton, Super producer, J- White(Bodak Yellow, Weak (Flo- Milli, Muwop, Hit Girl Summer and more), James Lopez (President of Will Packer Productions), GQ legend and creative director Jim Moore just to name a few. Tray has also recently been selected and named President of the TV/film distribution for Media Room 360.  This appointment will allow Tray to hand select projects for distribution on Amazon Fire TV, Roku, Apple TV, VOD,  and all android devices.  Tray’s work has also been seen on REVOLT & BET as he has produced multiple music videos which include:  Lil Ronny “Up In The Air” national hit song in 2016 & Fat Pimp’s “Young Finessor”.

Tamra Simmons is an internationally acclaimed CEO, producer, writer, talent director, and entrepreneur. She is most recognized for her work as the creator and executive producer of the ground-breaking Lifetime documentary series, Surviving R. Kelly. The docuseries has reached over 26.8 million viewers; over 20 million live streams since its debut on Jan 3rd, 2019 with part II airing in January 2020. Simmons has become one of the most sought after executive producers in the nation and has been honored by and nominated for awards such as the 2019 Emmy Award, Critics Choice Award (MTV), Best Documentary Series (MTV), Program of The Year, Inclusion Award, 2020 NAACP Image Award; recently she won a 2020 Peabody Award for her humanitarian work and more. Simmons’ names has become synonymous with some of

the most widely known public figures in the world including: Ava DuVernay, John Legend, Bill Maher, Chelsea Peretti, and Aziz Ansanri. With an extensive portfolio of work such as Producer on WETv’s Growing Up Hip Hop, Mary Mary, and casting director for several other major brands. Her work has been recognized by national media outlets including The Red Table Talk, NBC, FOX, Variety and many others.

The epiMediaGroup, LLC has been hired to bring international visibility to the upcoming projects and opportunities that this partnership will birth.  “It is important for our firm to continue working on projects that matter. That push the narrative and which forces America to continue to get better. Working with both Tray and Tamra will allow us to shine the light on issues in America that need to be brought to justice.  I’m excited about where this partnership will go and I am ready for the journey.” Stated, Ebony Porter-Ike, President of The epiMediaGroup,LLC . The epiMediaGroup, LLC has extensive experience working with global clients that have a very unique appeal to influence the masses.  This project will be no different.

“The reason I chose to retain the epiMediaGroup, LLC for my personal brand and production company is because their company values and method of execution are compatible with my outlook and approach to this industry. I look forward to leveraging the synergy between us to effect an optimal result as we continue to grow internationally.” Stated by Award Winning Producer, Tamra Simmons

“The reason I chose epiMediagroup, LLC was simple. I loved the team and I knew they could take us to the next level. It was extremely important to work with an African American Female publicist who has garnered respect throughout the industry.  As my brand continues to grow it is important that all of my relationships are mutually beneficial. I felt at home with Ebony and her team at The epiMediaGroup, LLC.”, Stated by Award Winning Filmmaker Tray Williams.

All media and booking inquiries should be directed to PRTeam@epimediagroup.com for Tray Williams, Tamra Simmons, LA Productions LLC and Pioneer Collectives, LLC.