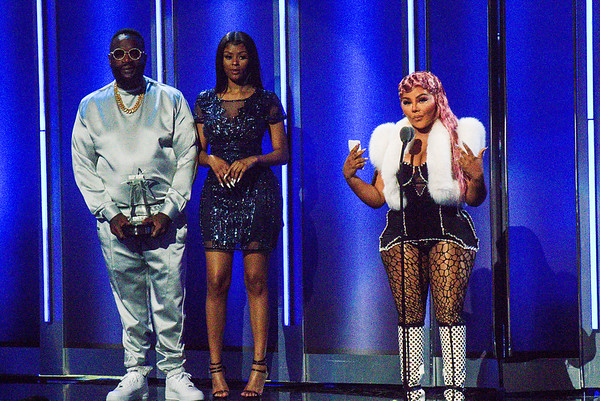 The BET “HIP HOP AWARDS” 2019 brought together the hottest names in Hip Hop to the biggest weekend in Atlanta, GA on Saturday, October 5, 2019 for the annual taping. Comedian and Rapper Lil Duval hosted this year’s awards from The Cobb Energy Centre which premiered on Tuesday, October 8, 2019 at 8:00PM ET.

J.Cole took the night, snagging three wins for ‘Lyricist of the Year,’ ‘Sweet 16: Best Featured Verse’ for his verse on 21 Savage’s “A Lot,” and  ‘Impact Track’ for his single “Middle Child.” Cardi B took home two wins for ‘Made-You-Look Award (Best Hip-Hop Style)’ and the visuals for “Money” took home ‘Best Hip-Hop Video.’  Travis Scott took home his first win in the ‘Video Director of the Year’ and ‘Album of the Year’ categories.  Newcomer Lil Nas X, also takes two wins for ‘Single of the Year’ and ‘Best Collabo, Duo or Group’ for “Old Town Road.”   Ghanaian rapper Sarkodie, took home the nights first award, and the first ever ‘ Best International Flow’ award.

The “Houston Hottie” Megan Thee Stallion, kicked off the night live from the boat performing a medley of “Hot Girl Summer” featuring Juicy J, and  “Cash **it” featuring the night’s “Best New Hip-Hop Artist” winner, DaBaby; before taking home two wins  of her own for ‘Hot Ticket Performer’ and ‘Best Mixtape.’  Continuing to be the hottest night in hip hop, performances included Saweetie performing “My Type,” and bringing out surprise guest Petey Pablo and Lil Jon who performed “Freek-A-Leek” and “Get Low.” Rick Ross hit the stage performing a medley that include a special appearance by T-Pain. DaBaby performed “Intro” from his debut albumKirkbefore bringing out Offset for “Babysitter;” later he joined Lil Baby for a performance of “Baby.” Chance The Rapper, did a powerful performance of  “Sun Come Down.” Rapsody, put on for the queens with an inspiring performance of “Nina” and  “Serena.”  YBN Cordae got the crowd woke  along with Anderson .Paak performing “RNP.”